Most Common Vision Problems in Seniors 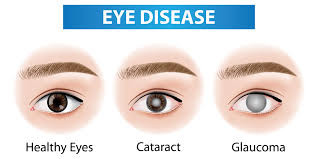 The following eye ailments are among the top concerns for eye doctors attending to senior citizens.  Regular eye exams can help catch each of these in their beginning stages which can lead to proper treatments meant to stall or prevent vision loss.  It is important that everyone, especially people over 65, have regular eye exams at least once every year or two.

1. Age Related Macular Degeneration (AMD): It is caused by degeneration or wearing down of the macular.  The macula controls central vision, so when it wears down it becomes more difficult for a person to see clearly.  Age related macular degeneration happens over time and is most prominent in people age 65 years or older. Risk factors include getting older, having a family history of AMD, smoking, and cardiovascular issues like hypertension.

There are two types of AMD: wet and dry.  90% of patients with AMD have the dry (nonexudative) type which does not typically lead to severe vision loss.  Approximately 10% of people with AMD have the wet (exudative) type which accounts for 80-90% of patients with severe vision loss caused by AMD. The “wetness” is caused by the weeping (leaking of fluid or blood) of abnormal cells that have grown in the macula.  Eventually a macular scar develops which is what causes the severe loss of vision. Many people with nonexudative AMD will have decent vision throughout their lives.

2. Glaucoma: It is one of the most common causes of blindness in African Americans. Glaucoma affects both men and women equally. Risk factors include having a family history of glaucoma, advancing age, a high level of myopia, hypertension, and diabetes.

Glaucoma is a slowly progressing disorder.  People are typically asymptomatic until the disease has progressed to the later stages. Symptoms include visual field loss and blurred vision. Medical therapy is typically the primary treatment method for glaucoma.  There are many different medications that can be used to slow the progression of the disease. There are also surgical options that can be taken into consideration if medical therapy is no longer working. Glaucoma can be detected in earlier stages if the person has regular eye exams done once every two to three years.

3. Cataract: Cataracts are one of the leading causes of blindness in the world. The word cataract typically means an opaque part of the eye that interferes with the person’s eyesight. In the United States the risk of going blind because of cataracts is much lower than some other parts of the world because there are highly effective surgeries available to help remove or remediate the damaged spot and restore functional vision. These surgeries are usually outpatient procedures done with minimal anesthesia and complications only occur in less than 1% of patients.

The symptoms of cataracts include blurred vision, glare, and monocular diplopia.  Cataracts can be detected early during routine eye exams.

There are two phases of diabetic retinopathy: Non-proliferative and Proliferative.  Non-proliferative diabetic retinopathy is the early phase where the symptoms may be mild or even nonexistent.  In this phase the damage is just beginning to occur to the blood vessels in the retina.  During the proliferative phase there are circulation issues that keep the retina from getting the proper amounts of oxygen.  This causes weaker blood vessels to form which in turn leak vitreous fluid in the retina leading to further vision complications and finally blindness.